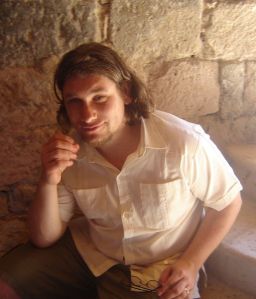 I’ve always written. Writing as a career, though, that never seemed a possibility. I studied at Victoria University, where I majored in anthropology, with an honours degree in political science. Abandoned law after one year – not a great move, income-wise, but not one I regret. My Arts degree provided the first step to the ledge overlooking a vast tract of the world. At least when I write I’ve got something to say.

About The Sovereign Hand
The Sovereign Hand I consider a modern folk tale as much as fantasy: using a familiar idiom to describe truths about the world. The story came first, quite simple on the surface, yet in practice, inconceivably deep and demanding to make real. Fortunately I had the élan and ignorance of youth to get me started, and nothing resembling a career to get in the way.

I won’t catalogue the things that did get in the way; given life, and an aspiring writer’s life, they’re fairly easy to imagine. But after my first full year’s work on the novel, it was 2/3rds done. The next year an extract, Rise and Shine, was Highly Commended in the biennial Pikihuia Awards for Maori Writers. In 2009 this was matched by House of Mirrors, the same year I finished my first full draft. At least one more draft each year, then Steam Press came on board in 2013, which meant further close and critical scrutiny, until here we are. A decade in the making.

The book is a complete work. There is scope for two following tales, but it was most important to me to tell one tale properly and not leave any reader waiting or paying for more. Love and thanks go to my wife for standing by and believing in getting things this far.

This site is also a blog where I can be caught ruminating on reading, writing, and matters of an anarchically democratic nature from time to time, somewhere between the webworks or China Mieville and Bernard Beckett. I haven’t been in a position to elucidate or stretch the bounds in this respect, but it’s on the agenda.