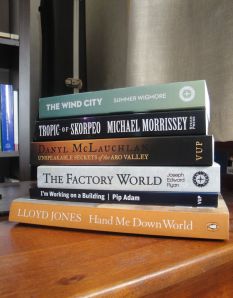 2013 was my Christmas of Literary Giving. All my family got great NZ books, as pictured, plus The Rosie Project by Graeme Simsion‎ (a thoughtful choice, which my mother promptly vetoed by exchanging it for Amy Tan – sigh.)  Of the seven, I’d only read Tropic of Skorpeo and The Factory World, so I was giving away treasures I actually want to read myself: an inverted narrative about the construction of the world’s tallest building on the west coast of the South Island; Wellington’s Aro Valley has a hotbed of adventure, dark magic and intrigue – maybe with The Wind City‘s Maori gods romping around in the capital at the same time? Definitely no lack of entertaining ideas.

Of the books I have read recently, I enjoyed Hamish Clayton’s Wulf, historical fiction fusing Te Rauparaha with the Beowulf epic. Sometimes I take just one or two things away from a novel, and in this case it was the evocative emphasis on a New Zealand that was all “black and green”, without the imported autumnal colours. Living in Dairyland, I was really impressed by that simple point, and kinda yearn to be in that long-gone place. Makes me appreciate my time in what remains of our bush even more.

Kafka’s The Trial. Freedom of information advocate Aaron Swartz was facing the full weight of the US anti cyber “crime” agenda – years of stress, maybe years of jail, millions in punitive fines – after he made academic texts held by MIT available online. Swartz read The Trial in 2011, shortly after his arrest, and according to his father he called it “deep and magnificent” – “I’d not really read much Kafka before and had grown up led to believe that it was a paranoid and hyperbolic work,” instead, he’d found it “precisely accurate—every single detail perfectly mirrored my own experience. This isn’t fiction, but documentary.”

Having now read The Trial, it is hard to argue – it resonates with my experiences with Inland Revenue, even challenging a parking ticket, any bureaucratic power. Has anyone not hit their head against a govt department wall? And now they are gathering all our information so they think they have even more god-like powers to judge guilt before innocence, and for anyone hoping to change the world this is chilling to the core.
Aaron Swartz was, of course, driven to suicide last year. No official of any sort will be held responsible for the witch hunt. He was 26.

The most challenging and fascinating, and impressive, novel I’ve read lately is Sleight by Kirsten Kaschock. As a writer, you are attracted to reading that resonates with your own writing. I enjoy texts that ask the reader to make their own connections, and our understandings of the characters, the story, and “sleight” begin as disparate then coalesce, in the same way the sleight troupe’s practise comes together and arrives as a singular definitive event. In this way, the subject mirrors the novel’s structure, which is always effective, when achieved.

The multi-dimensional, abstract, almost impossible performance art-dance Kaschock created in sleight also resonated with the abstract-impossible aspects of The Sovereign Hand: those elements that are often decribed as “unfilmable”, where concrete description and detail surrender to an impression that eludes reality, and is all the more potent for it. The slake moth of Perdido Street Station and the perpetual train of Iron Council come to mind; the affect of scent in Süskind’s Perfume; In The Sovereign Hand, it’s the diablerie, in particular. All evidence that sometimes you can not just call a spade a spade, that you need richer language to unchain the reader from unthinking signifiers and permit them to draw their own ring around whatever is signified in their mind. That’s what speculative fiction, in whatever genre, does best.

Next post: Joe Sacco’s Palestine, The Luminaries, and maybe a bit more about my book.

What’s next with The Sovereign Hand?